The officer smirked, trying not to laugh. After admonishing dad for speeding, he walked back to his vehicle with a funny story for his coworkers; a tale of my dad slyly lying about the urgency of momma’s baby, due to deliver my brother two months from now, and of momma over-selling the shit out of her non-labor, as I, a terrified six-year-old, observed in saucer-eyed, horrified silence.

We must’ve been quite the sight; dad explaining his urgency to the cop with a softness that matched the long shadows just after the sun dipped below the spring-sprinkled horizon; momma – unprompted, on-cue, and with a scenery-chewing overacting exhibition to make Shatner wince – unsuccessfully selling the urgency dad had just lied about with the authenticity of a wildlife film narrator; me in the back seat, wide-eyed and instinctively quiet, taking it all in; the patrolman’s flashlight, an impromptu stage spotlight for our three-person routine (four if you’re counting my brother, but the cop didn’t buy it, so let’s just go with the trio.)

After a beat of silence, our eyes finally adjusted from the shock of the cop’s harsh halogen giving way to soft shades of amber, dad shook his head, a grin growing on his darkened face. He looked back at me. “You cool, B.J.?”

I nodded, and squeaked out a, “Yeah.”

“Yeaaaaah?” he repeated, mimicking me.

“I mean… yes,” I corrected myself with a smile, relieved that dad sounded like dad again.

We didn’t have a term for code-switching back then. It just felt like Dad was bilingual and was training me to be too. I knew that whenever he broke out the Wildlife Film Narrator voice that shit just got real. He always used it when white people were involved, and always when those white people were in positions of authority.

I instinctively knew to get my shit together whenever he used it.

If anyone heard his everyday-people vernacular, they’d have a hard time reconciling the fact that both voices were his. When dad was being dad, he always reminded me of Shaft-meets-Sho’nuff-the-Shogun-of-Harlem; brassy, cocky, and cool-as-hell. I admired both voices, knowing that Sho’nuff was dad’s native tongue. Both were authentic in a way; Sho’nuff was my dad, the Film Narrator was the long shadow cast by dad.

Momma code-switched too, but it never sounded as jarring as when dad did it. Mom’s tone was always a hairsbreadth lower than frantic; it was like she was barely holding things together in her head. But momma always sounded like momma, even when she was performing. Her professional voice reminded me of how folks talked on Dynasty before someone dipped in diamonds got their face slapped; unnecessarily British and whatnot.

“Oh hush, Barry! I was just tryin’ to help,” mom shot back between giggles. “You didn’t get the ticket, did you?”

Together, their gallows-laughter was the greatest musical duet I’ve ever heard. My parents loved comedy. Our bad days were terrible, but our good days could wring sunshine from a rainy evening dusk just like it did that spring evening. Dad’s laugh sounded like a chorus of good-humored seagulls. Mom’s laugh was carbonated; starting low, and then bubbling higher, eventually meeting dad’s seagulls high in the atmosphere. Though I’ll never hear either of their laughs again, it just occurred to me that they are always with me. Whenever I’m trying to make people laugh, all I’m really doing is trying to recapture this moment, if only for a moment. 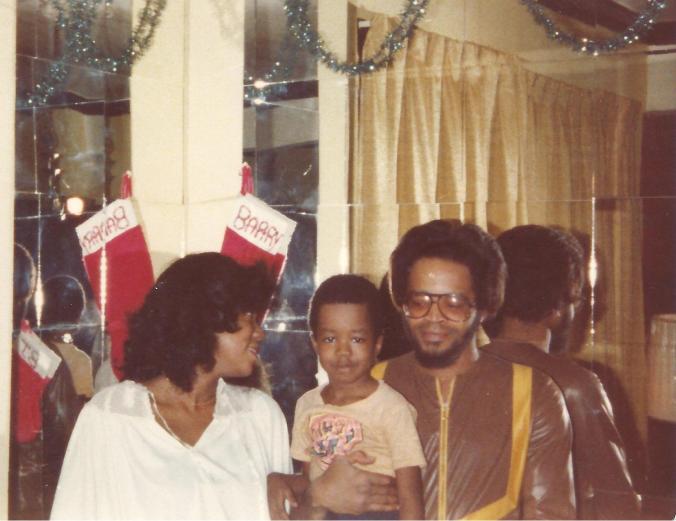 All four of us! (Mom is pregnant with my younger brother in this photo.)

Written for NaPoWriMo’s day 3 prompt, an elegy. I was also inspired by dVerse’s Haibun Monday: The Shadow Knows, hosted by Hayesspencer. I didn’t share it on dVerse though, as this isn’t a traditional Japanese Haibun. I did enjoy writing it though. There were some laughs and tears during the writing process.

Want to see how traditional Haibun are supposed to be crafted? Go here.

exercising hearts and minds, lest they waste away